In March 2021 German surgeons from various fields across general, gynecological and urological surgery were introduced to Dexter at two separate events in Berlin and Frankfurt am Main.

In Frankfurt, visitors from numerous institutions all over the country got to test-drive Dexter over a two-week stretch. This hands-on, invite-only event gave surgeons and their teams the chance to discover, train and also input on future uses of Dexter across various surgical fields.

Dr. Stoffels and Michael Friedrich described how Dexter was designed and developed hand-in-hand with leading surgeons, and how clinical feedback and a user-centric design approach informed various phases of his evolution.

Here’s a video that was part of said presentation describing Dexter’s evolution, showing Michael operating a purely mechanical early iteration of Dexter in 2016. This version of Dexter obtained CE mark, but does not exist anymore today.

Prior to arriving at the motorized version of Dexter that we know today which obtained CE mark in December 2020, we discarded several versions of Dexter in order to optimize usability and precision, and ultimately maximize patient benefits.

Dexter has always been about removing complexity from robotic surgery in order to integrate the benefits of laparoscopy and robotics, and make the advantages of robotic aid more accessible for a wider array of indications and institutions. Today, he defines his own, new category of robotics – hybrid robotics – thanks largely to the aforementioned close collaboration and co-development with leading surgeons. 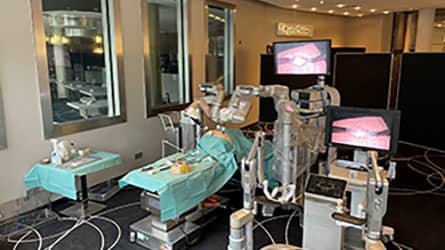