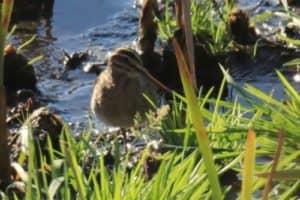 In 2019, Biopôle completed a new biotope in collaboration with the cities of Lausanne and Epalinges and the State of Vaud. The project was launched after few Jack Snipes – a rare species in Switzerland – had found refuge in a retention basin built for construction works on site.

Originally built for water management during construction work on the M2 metro and surrounding buildings, the basin had over time become an ideal environment for the settlement of various species of fauna and flora. Among others, the snipe, a rare species in Switzerland, had found refuge here at Biopôle for its winter stay. In order to restore the retention basin to its original use and to allow the further development of the site, in harmony with the flora and fauna now settled, a project for the construction of a biotope was launched.

The new biotope is now completed. The pond with a water surface area of approximately 1,000m2 is currently promoting the long-term development of the fauna and flora. Lionel Maumary – the ornithologist who originally discovered the Jack Snipes on site – has been observing gradual migration of birds, insects and others. The pond has become alive and even five Jack Snipes were recently observed, a success for all partners involved.

Visitors can observe the animals from behind the fence that has been installed to protect the pond. In the future, we hope to see many more bird species at risk to find a safe shelter at Biopôle!